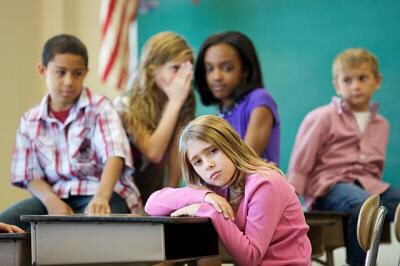 Student:  “Ms. Lyons, someone is talking stuff about me.”

Teacher: “How do you know?”

Student:  “Someone told me.”

There is so much that today’s adolescents deal with on their journey to be educated.  Sometimes the classroom doesn’t feel like a ‘safe’ place – not because of the teacher. It has to do with the interactions amongst themselves and what the teacher is most often unaware of.  Many students live in FEAR because of being bullied.

I called a meeting today to settle a dispute between a group of girls who have been rumored to have fight planned soon – to “jump” a girl.  We started with a casual discussion about community and where each of the started in Elementary school.  Then, I asked trust and loyalty.  If they trust me, I will do the same for them.  That means honesty.  They were open about the things they had said and done towards one  another. There were apologies and more importantly they asked if they could come back and do this again.

I committed to a once a week ‘sit down’ with the girls.  I was extremely proud of them!

This site uses Akismet to reduce spam. Learn how your comment data is processed.

Spring Break is Over!March 23rd, 2020
We are now engaging in REMOTE LEARNING. Go to Google Classroom.